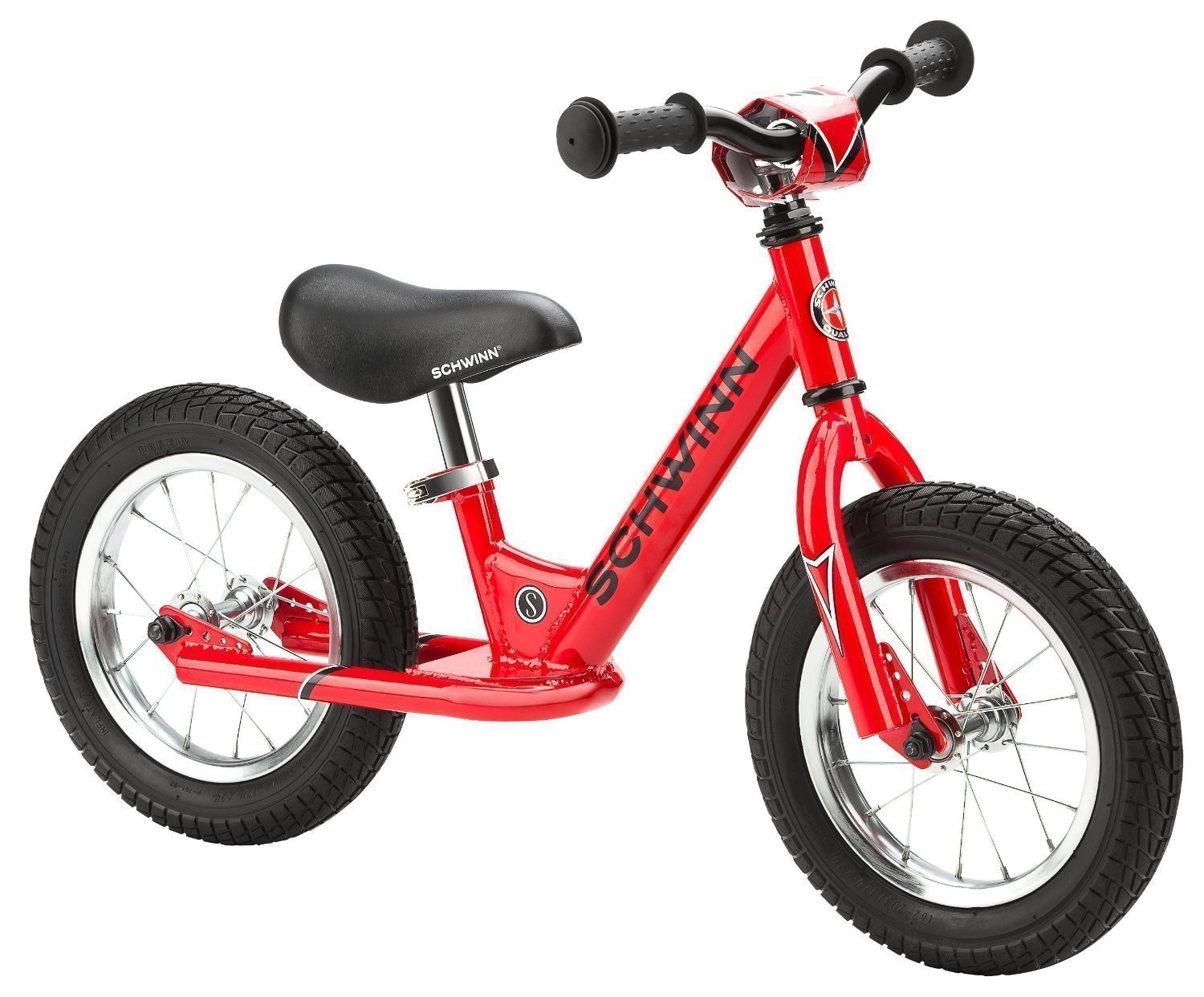 Although the Schwinn of today bears little resemblance to the company founded in 1895, the name is still synonymous with bicycles. The Schwinn Bicycle Company declared bankruptcy in 1992 after which the brand switched hands numerous times, so don’t bank on the name when it comes to deciding if this is the bike for your child.

I suspect that nostalgia will play a big role as parents who grew up with Schwinn bikes will want their children to have one too, but let’s look at this model in greater depth to see if a purchase is warranted.

I guess that I have become a little spoiled when it comes to all the lightweight bikes that I have tested previously, as the Schwinn box felt a bit heavy to me. Closer inspection revealed that the bike is just under 11 lbs which is almost twice the weight of some of the lighter models by other manufacturers. This is probably due to the size of the bike and overall I would say that it is more suited to preschoolers and older and definitely not toddlers.

I have heard complaints about chipped paint and scratched frames out of the box, but thankfully the bike I received was in pristine condition. The assembly was straightforward and didn’t give me any problems as I just had to attach the front tire and handlebars before sliding in the seat. The only issue I picked up was that the wheel bearings were a bit tight and required some adjustment, but I was able to quickly remedy this before handing over the bike to my daughter.

Overall the assembly of the bike took me about 30 minutes, which is a bit longer than some of the other bikes, but still not too bad all things considered. 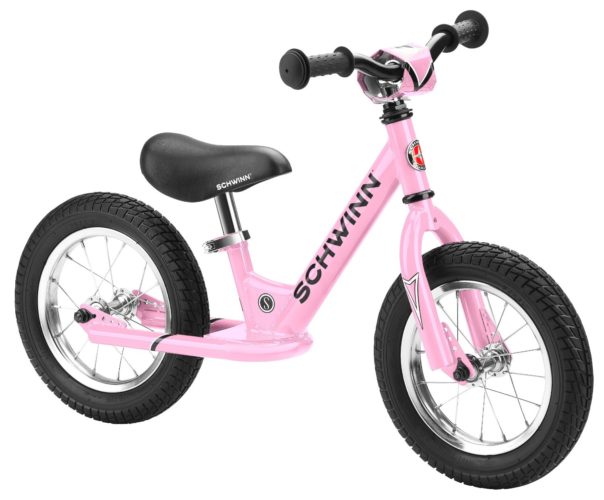 I really like the design of the Schwinn Balance Bike and no matter what color you choose it really catches the eye. My daughter loved the seat which is not only durable but very comfortable especially when compared to some of the cheap plastic seats you often see on lower end balance bikes. Right off the bat, it is also clear to see that the tires on this bike are made from quality rubber and offer great grip.

Personally, I love the pneumatic tires as they offer the smoothest and most comfortable riding experience for youngsters, but be sure to lecture them about where to safely ride the bike so that you don’t have to worry about punctures. The tread on this tire, combined with the steel spokes, make the bike look just like an adult bike and children will gain a lot of confidence by riding something that looks just like the bikes that the bigger kids have.

As I’ve mentioned earlier, the Schwinn is quite a big bike and although you can adjust the seat as well as the handlebars, it is still going to be a bit unwieldy for younger children to operate. While I like the overall design of the bike I do have a few concerns about the frame. The bike has a protruding footrest, which is nice for teaching kids to balance, but I noticed that, especially with smaller children, it has a tendency to hit them on the calves when they are running with the bike.

This part of the bike is also the easiest to damage when dropped as the paint hits the ground directly. I have also heard that some kids hurt their feet or legs on this part of the bike if they fall and while it didn’t happen to my daughter, it is definitely something to be cautious about considering the weight of the bike. I should also mention that this is a bike that you should keep out of the elements unless you want to see it rust. A final point worth mentioning is that the handlebar cover is very thin and flimsy so it definitely won’t protect the child if he bumps his head against the bars.

Apart from how easy it is to chip the paint this bike is very sturdy and if you look after it carefully will last a long time. It is available in four different colors and the bright paint really make the bike stand out from the crowd. The price is a bit higher than some of the other balance bikes, but I’m sure that this is due to the quality tires and seat which are both features that are often sacrificed in order to bring the price down. Personally I think that these features are worth the extra investment as it will make things more comfortable for your child.

While there is a lot that I can criticize about, the Schwinn balance bike it is still a solid offering with plenty to like. Older children will love the look of the bike

While I would recommend a smaller and lighter bike for toddlers, the Schwinn is a nice option for older kids to learn the ropes. The overall design of the bike is very nice, although there are a few safety concerns. As long as your child rides responsibly there shouldn’t be any problems and the fact that the bike has inflatable tires is definitely a bonus.

While the Schwinn is not the best or cheapest option available on the market it is a lot better than some of the cheaper, flimsier models that I have seen and with proper care will last a long time.

Kidsgearguide.com is a participant in the Amazon Services LLC Associates Program, an affiliate advertising program designed to provide a means for sites to earn advertising fees by advertising and linking to products on amazon.com.