It’s human nature to look to the sky and wonder–what is up there? We’ve been gazing at the stars for thousands of years, trying to make sense of what we see. From the ancient Greeks telling stories of heroes becoming constellations in the sky through to the present day, where scientists use high-powered telescopes to take pictures of black holes, there’s an innate curiosity about what’s up there.

Astronomy isn’t just for scientists, though. It’s for everybody, and it’s a great way to engage kids in learning about the world. Telescopes can be used during the daytime, too, for birdwatching or observing nature. The skills and knowledge a child can gain from a telescope will stay with them throughout a lifetime.

The Celestron AstroMaster 70AZ is a great telescope for beginners. Its 70 mm aperture lets in plenty of light, and the two eyepieces give you different magnification options. It has a focal length of 900 mm and a focal ratio of 13, making it ideal for observing faraway objects such as stars and planets or birdwatching during the daytime. This telescope has an alt-azimuth mount and comes with an adjustable full-height tripod.

It comes with bonus software for use with a PC, Mac, or laptop, the Starry Night Basic Edition. Very helpful for beginners; this will allow you easy access to maps of the night sky so you can figure out exactly what you’re looking at.

This telescope is easy to assemble–check out this quick video for a demonstration:

For more details about the features of the Celestron AstroMaster 70AZ, read on!

What does aperture mean, and why is it important in a telescope?

Aperture is the measurement of the distance across the widest point of the objective mirror, which captures the incoming light–essentially, the diameter. The bigger the aperture, the more light it can gather. Aperture is generally considered the most important data point to look at when you’re telescope shopping, even more so than magnification. In some cases, objects in the sky are seen more clearly at lower levels of magnification. When it comes to aperture, bigger is generally better.

The Celestron AstroMaster 70AZ has an aperture of 70 mm, a common size for an entry-level telescope for kids, and will give you clear, sharp images. It also comes with two eyepieces. One of them, at 20 mm, offers 45x magnification, and the other one, 10 mm, offers 90x magnification. The combination will allow you to focus on distant objects with great clarity.

Both eyepieces are fully coated. If you’re looking for higher magnification, you can also purchase an accessory called a Barlow lens that attaches in between the telescope and the eyepiece to double or even triple the magnification. A 2x Barlow is an inexpensive way to boost your telescope’s magnification capabilities if you feel it is necessary.

What do focal length and focal ratio (sometimes written f/ratio) mean, and how do we interpret these numbers in a telescope?

Focal length is the measurement of the distance that light travels from the aperture, where it enters the telescope, to the exit point where the eyepiece is located. A longer focal length will increase magnification but shorten the field of view, which is great for observing specific celestial objects such as planets or the moon. A shorter focal length will give you a wider field of view, making it ideal for observing galaxies or clusters of stars.

To determine the focal ratio, you need to divide the focal length by the aperture. This number is used to determine the speed at which you will see objects through your telescope. The lower the number in the focal ratio is, it will receive images faster and show clear images of a wide field of vision. A higher number in the focal ratio will give you clean, well-defined images in a narrower field of view. The f/ratio is usually more important for people who intend to do astrophotography, so beginner astronomers don’t need to worry about it too much.

The Celestron AstroMaster 70AZ has a focal length of 900 mm, and the f/ratio is 13, which is on the higher side, so it is an ideal telescope for observing objects like planets or moons.

The Celestron AstroMaster 70AZ features an alt-azimuth mount. What does this mean, and why does it matter?

As the earth rotates, if you have a telescope focused on a particular point in the sky over a period of time, you might notice that the star or planet you are focusing on appears to move. To counteract that, you can move the telescope slowly with a control rod, so you can keep the same point in your field of vision as the earth rotates.

‘Azimuth’ is a word that refers to the left-to-right arc of the horizon; ‘alt’ refers to altitude. So alt-azimuth essentially means ‘up and down’. It’s the most common mount found on amateur telescopes because it is easy to set up, easy to use, and relatively inexpensive. If you want to do astrophotography, an equatorial mount is recommended, but for kids, beginners, and casual use, an alt-azimuth mount is what you need.

The Celestron AstroMaster 70AZ comes with a red dot finderscope to help you align your telescope to objects in the sky. It also comes with bonus astronomy software, the Starry Night Basic Edition. This software will give you a guided tour of our solar system and can even show a model of what the night sky will look like from your backyard and point out where to look to view different celestial objects. You also get an adjustable tripod with steel tube legs and an accessory tray. This telescope weighs 11 lbs and comes with a two-year warranty for your peace of mind.

It’s got the same aperture as the Celestron AstroMaster 70AZ, but that is where the similarities end for the Celestron Travel Scope 70. This telescope has a much shorter focal length, at 400 mm; its focal ratio is lower at 5.7, making the Travel Scope 70 ideal for viewing larger objects such as star clusters at nighttime or landscapes during the day. It also comes with two fully coated eyepieces, one 10 mm and one 20 mm, to give viewers a choice of high or low magnification.

The Celestron PowerSeeker 127EQ Telescope has a much bigger aperture than the AstroMaster 70AZ, but it also has a heftier price tag. It’s got an aperture of 127 mm, which gives it a greater light-gathering ability. The focal length is 1000 mm, and it has a f/ratio of 8. It comes with two lenses, 20 mm and 4 mm, plus a 3x Barlow lens, which will triple the magnification of the lenses. It comes with an adjustable travel tripod, but at 22 lbs, the PowerSeeker 127EQ would be heavy to bring along on a hike.

The reason for the heavier weight is that the PowerSeeker 127EQ has another big difference from the other telescopes we’ve looked at – it has an equatorial mount, not the more common alt-azimuth style found on beginner telescopes. Experienced astronomers and those interested in astrophotography prefer equatorial mounts, but they’re not as easy to use as an alt-azimuth.

They need to be polar aligned, which can be complicated to figure out, especially if you are brand new to astronomy. For that reason, I’d only recommend the PowerSeeker 127EQ if you have previous experience with telescopes. For beginners, the alt-azimuth mount on the Celestron AstroMaster 70AZ would be more suitable.

What’s in the Box?

With the Celestron AstroMaster 70AZ, besides the telescope tube itself, you get one adjustable tripod with steel tube legs, one 10 mm eyepiece, one 25 mm eyepiece, one erect image star diagonal, one red dot finder scope, and software for the Starry Night Basic Edition program.

A telescope can be the catalyst for fostering a lifelong interest in astronomy that you, your child, and your family can enjoy well into old age. With a good beginner telescope like the Celestron AstroMaster 70AZ, you can observe anything from planets millions of miles away to birds in distant trees, expanding your mind and broadening your world. 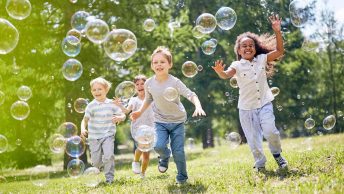 The Best Bubble Machine for Kids 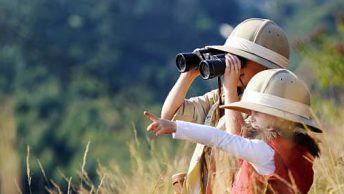 When and Where to Use Your Binoculars 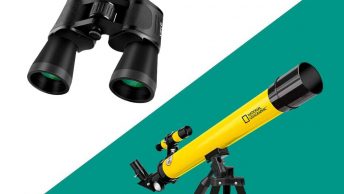 Binoculars vs. Telescopes – Which One Should I Buy? 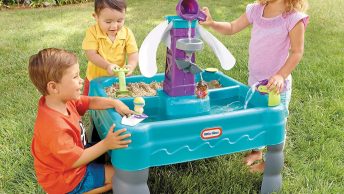 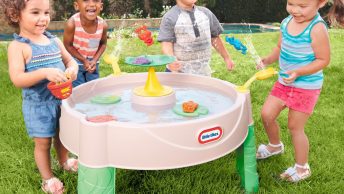 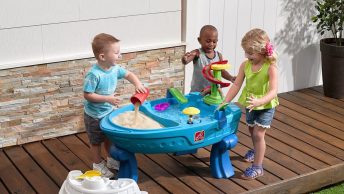